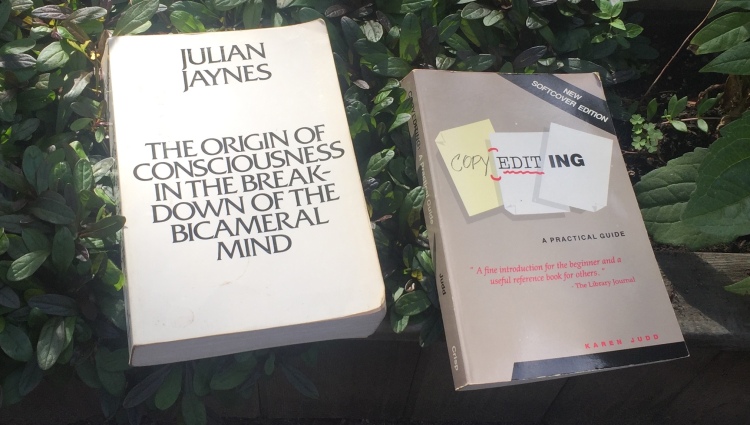 Every so often, I try to clear a little space on my already overstuffed bookshelves. Today I’m leaving two books on my porch, one of which had a big effect on me when I first read it–and possibly on two people who didn’t.

Julian Jaynes’ The Origin of Consciousness in the Breakdown of the Bicameral Mind is a doozy. Its thesis is that ancient people did not think like we do–their brains were ruled by the right hemisphere, and they perceived the thoughts from the left hemisphere as voices coming from the gods. Consciousness was eventually learned, our two hemispheres finally becoming one.

It sounds crazy, but Jaynes is very convincing, using Greek poetry, the Bible, and schizophrenia as part of his evidence. The book was an unlikely bestseller when it came out in 1976 and remains a cult classic to this day–apparently, it’s even referred to in Westworld.

At the time I was reading it, sometime in the mid-90s, I had just started dating a young law student I’ll call D. We met through her previous boyfriend, an artist I met in grad school. After the artist left New York, she and I had no crossovers in our social circles; I hung out with bohemians, she with law students.

One night, she took me to a party to introduce me to her friends. I was ill at ease–her ex had been a wild man, and I knew they were all curious to meet his possible successor.

I don’t remember much of the party, but I do remember a friendly classmate of D’s who made a special effort to make me feel comfortable and include me in conversations.

At some point, someone asked him what he was reading. His eyes lit up and a small circle of people gathered around him as he recounted a mountain climber’s memoirs. He told the story well, wowing and making his audience laugh. When it was over, he asked me, “And you, Giovanni, are you reading anything good?”

Everyone turned to me. “I’m reading a book called The Origin of Consciousness in the Breakdown of a Bicameral Mind,” I gulped. I could see their eyes starting to glaze before I even finished rattling off the title.

The friendly classmate asked what it was about. As I started to explain, the circle began dispersing. By the time I had stumbled through my answer only D and her classmate were still politely listening. A week or two after that party, D and I broke up.

Years later, I learned from her ex-boyfriend that D had married that classmate. They bought a house in Brooklyn and had a child. I can’t help but think that Julian Jaynes and I had a little to do with it.

As for the copyediting manual I’m also giving away, I just don’t think I nede it.