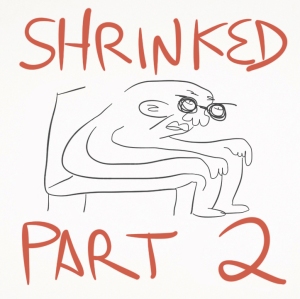 Not long after moving to Brooklyn I was introduced to two women at an art opening–a blonde and a brunette. They asked why I had come to New York. Embarrassed to say, “to be an artist,” I jokingly answered, “to be a poet.” The brunette pointed to the blonde: “She’s a poet!” “I’m sorry, I was kidding,” I said. “I came to New York TO BE A DANCER!” The blonde then pointed to the brunette and said: “She’s a dancer!” I skulked away.

I ran into the poet on the sidewalk and we shared a cigarette. I confessed that I was studying art and she told me she was working on her master’s in English. We made plans to see each other again.

After our second non-date we started spending all our free time together. She was brilliant. She introduced me to Flann O’Brien and I introduced her to Einstürzende Neubauten. We spent whole days in bed playing Scrabble, having sex, and eating entire fat-free Entenmann’s cakes out of the box. We walked around town talking like Mark E. Smith. Our glasses even matched. This was what I had come to New York for! I was in love.

“I can’t be in a monogamous relationship,” she told me.

After a handful of stormy breakups in Texas and a baffling one in London, I was convinced that romantic relationships were inherently flawed. Everyone cheats (myself included), leading to lies, jealousy, and heartbreak. But if it’s all done in the open then it’s not cheating, and thus there’s no problem, right?

A few months later, the poet met a DJ (hey, it was the ’90s) and soon after started sleeping with him. She was perfectly honest about it from the start, just like we had agreed.

It knocked the wind out of me, but I told myself I could handle it. I was over the petty emotions that I knew from Texas. I was going to rationalize my way to happiness.

In no time I was wracked by anxiety and severe insomnia. I started losing weight and the bags under my eyes were heavier and darker than usual. A friend told me there was a rumor at school that I was struggling with drug problems.

“You need help,” said the poet. She had me make an appointment at the Washington Square Institute. I went through an intake process in which I was asked a lot of questions about my life, and a couple of weeks later I was assigned my first New York psychologist.

I was a little unnerved by her constant chewing of nicotine gum, but I liked her. She was smart and witty, and unlike my therapists in Texas, she didn’t talk about herself. After just a couple of sessions I was feeling better.

But my relationship with the poet continued to deteriorate. I asked her to stop telling me about her affair with the techno guy and it just made things worse. Now I had no way of telling how serious they were getting and was too scared to find out.

I was telling my psychologist about it when she just leaned over and said “Break up with her.” “What?” “You’re intelligent, sensitive, and funny. There’s tons of girls out there who would love to go out with you. Dump this woman already!”

I went home shaken. I called the therapist and left a nervous voicemail. I said she had crossed a professional boundary by telling me what to do and I wasn’t comfortable seeing her anymore.

She called me back full of regret.  “Please don’t end therapy, we can work it out! Things were going so well!” Too late. Call it ironic transference, but I broke up with her and stayed with the poet.

Next: Things really start getting crazy