In a fit of optimism, Sabine and I got memberships to MoMA last December thinking that the repeated visits would pay for themselves. But just like other people with their gym memberships, we ended up only going once this year. When work let out early yesterday, I decided to visit the permanent collection and try to get some of my money’s worth.

I always get cranky after fighting my way through the crowds on Fifth Avenue, and my heart sank when I arrived at the museum and saw the mob waiting to get in. It was gratifying to pass them thanks to my membership card, but not so great once I was in. Why doesn’t it occur to anyone in New York to actually walk up the escalators? Invariably, people freeze as soon as they step on, taking on languid poses to block anyone wanting to pass them. No wonder the inventor killed himself.

When I finally made my way into the permanent collection I was faced with another horror: the iPhone catalogers. These are the people who flit from masterpiece to masterpiece taking photos, only looking at the works through their viewfinders. Why bother going to the museum if you’re only interested in photographs of the art? Here’s a tip: Just visit the website and save yourself $25! Trust me, it’s not that hard to find a good jpeg of Warhol‘s work.

Slightly less annoying were the many people getting their photos taken next to art (though I can’t blame the teens who discovered that Daniel Buren’s stripes make good backdrops – I suspect it was part of the artist’s point). I hurried through the increasingly conceptual sections and went up to the fifth floor, which was of course even more crowded. Old ladies do love their fucking Kandinsky! Thankfully I don’t, so I was able to spend a fair amount of time looking at works by lesser-known artists relatively undisturbed. I did have to put on my headphones, though, because stationed at every wall there is a visitor reliving his Art History 101 course by repeating everything he can remember to his companion. Loudly. I wish I had prepared accordingly, because the Cole Porter songbook was not the ideal soundtrack for looking at early modernism.

My way out was even more frustrating than my way in. You can’t even walk down the escalator? Really? It takes no effort! Gravity is on your side, people! 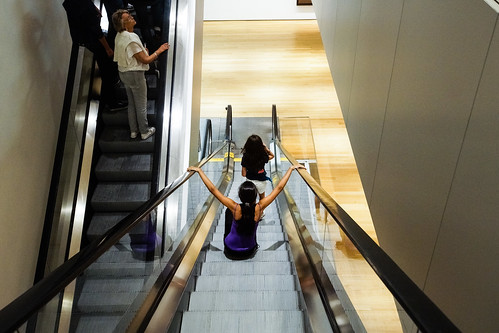 Once out, I took a deep breath and faced Fifth Avenue again. Sure, it’s great to live in a city where if the mood strikes, you can simply walk a few blocks to see some of the world’s best art in person, but does it have to be so damn crowded?

Then I saw what looked like two families of tourists headed my way. How did I know they were tourists? All eight or nine of them were wearing matching knit hats with Elmo’s face on it. One of the moms dropped her bag of popcorn, and the rest of the group jeered at her. “How embarrassing!” she yelped. Lady, dropping the popcorn is the least of it.

And that’s when it hit me: While the tourists might get on my nerves, they’re just visiting. If I left New York, I’d actually be living with them. I love New York.

One thought on “Hell is other people. At MoMA.”